Ita Loli as a new type

I suggest making Ita-Loli a separate type of the Lolita fashion. Like other disliked but very nice ones, for ex. Ero-Loli, Guro-Loli etc. True Lolitas in sickly sweet brand clothes, eat me! :P

In TV shows I explain it like this: "When I was younger, I liked sewing clothes for my dolls, and I made them that way because I liked what they looked like. I put them on the doll because I wanted her to look the way I wanted, not "I wanted her to look hot". Same is with myself now even though my appearance is far from a doll's one: I make clothes the way I like them and I put them on because I want to look like that. Not to pick some jerks up. "

Like any other type of fashion, Lolita has changed since 2005. And I wouldn't say it's for the better. Now we have strict rules I often consider stupid, SAME brand dresses with sickly sweet prints, catty bitches who will give their last underpants for a new brand dress and would sigh in disgust when they see "cheap lace, shiny fabric and a Bodyline outfit". They eat newbies so that they don't want to go on with following the style, and also there's a common opinion that it's "not a cheap hobby". That is - it can only be for those who are ready to starve to save for a brand dress. I don't want to be called a Lolita because I don't want to have anything in common with those nasty people.

The offensive definition of "ita-loli" (painful Lolita) is sticked to almost all people who at least try to be creative in their outfits and general images while those who don't care for their bodies and faces but are dressed in brands are mostly appreciated. I don't mean naturally plus-sized people or those with adult faces - certain Lolita styles and outfits look awesome on them. I know it because I suffer from the last mentioned problem myself. T_T

So if anyone who has their own vision of Lolita is called Ita Loli... Why can't it be separated into a branch of Lolita fashion that involves and encourages creativity? I understand that not all tries end in success. But isn't it better to advise about how to make it better than calling a person names and telling them they're bad? How many of you had your first tries ended in 100% success? Personally I've gone through failures. Wanna see my beginnings of goth?

Now I'm working on a dress that would definitely be called ita. I chose white fabric used for men's shirt, it has a light purple shade. I'm gonna make a "lace monster" with kilometers of non-cotton lace.Why? Because cotton lace is such a pain in the ass to iron! See, what lolita language I am using! But I'd better be a brutal biker than a catty female snob with daddy's or boyfriend's  credit card and an addiction to brands.
And now I am going to say something many true Lolitas will hate me for. I don't like MOST modern brand clothes. A pregnant elephant silhouette, same sickly sweet prints and total orientation towards childish appearances and body types. But I'm sorry, aren't there taller people who understand they'd look funny in all that cutesy stuff?
I prefer what was shown in the earliest Gothic&Lolita Bibles, lots of lace that looks nice, showing off stockings WITHOUT ANY sexual meaning, dark Mana-style makeup and perfectly pale skin in combination with my REAL hair. I sometimes use extensions, but they are literally a headache so they're for "bad hair days" only. :)
Here are a few pics of what I still like despite it's not "true": 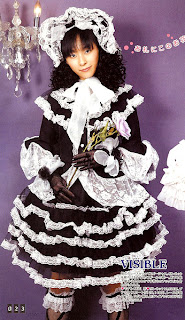 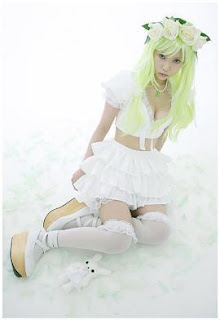 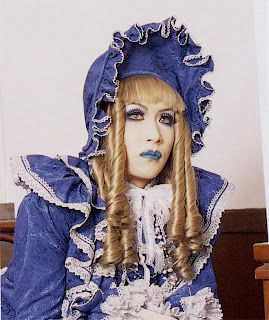 A rectangle headdress is one of very few that suit me as well. It can be ita, but only when it's badly made and resembles a daily pad with lace. But please don't mix these with plainly decorated nice ones.
I'm not shameless enough to be goth. Too dark, not catty and rich enough to be lolita. So I prefer being myself. When I have my new dress photographed, I'll label each pic as "It's NOT a Lolita dress, it's a goth dress. So dont worry, I don't call myself one of you."
I'll show you some of my Lolita attempts, of course with a dark shade of Goth. I don't think they are bad even though they break most modern Loli style rules.

Lolita fashion used to be the naive and not adult/dirty beautiful fairytale for older people who are tired of the ugly and unfriendly world. Now it seems to have become another unfriendly world concerned about money and being like everyone else. That's sad.
And maybe "the brand fever" is a marketing trick used by brands themselves? For ex. - people affiliated with those companies hang out in the world loli community planting those stupid opinions about what's true and what's not? All those rules look so fake and man-made... Maybe I am not right but this is just an assumption. And if I'm right, the Loli brands will be even a bigger disappointment because I used to consider them something more fairytale-like than the cynical and snobby glamour ones.
Posted by Orchid at 4:14 PM